How To Become An Art Collector 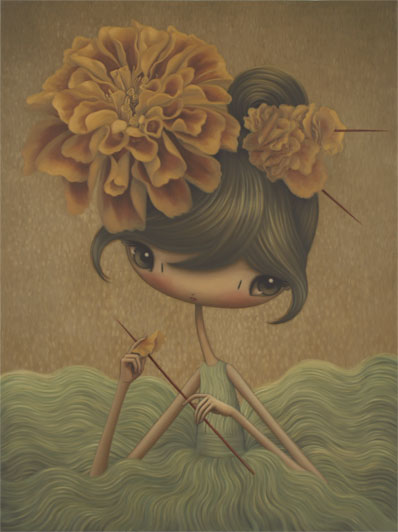 When Tony Greenberg, a 35-year-old retail real estate developer, moved with his family into a 7,000 square-foot house in Westport, Conn. in 2008, he started to fill their new home with art. On display today are op-art pieces that his grandmother collected in the 60s (rescued from his mom’s basement), and more than a dozen other works he bought for between $300 and $10,000 that form the beginnings of a collection of pop surrealist art. These include limited edition prints by surrealist figurative artists Lori Early and Mark Ryden and three plastic “dissected companion” sculptures by street artist KAWS. His showstopper piece that burst the $10,000 mark is a 5 x 6.5 foot painting, “Flower Hairpins,” of an Asian waif all dolled up by Thai artist Sung from the Greenberg van Duren Gallery (no relation) in New York City. “We had to splurge on that one,” says Greenberg. “I look at it as part of our alternative investments allocation.”

Whether you’re young and have moved into a new house with a lot of walls to fill or you’re an empty nester looking for art for your new condo, the search for art can be fun, and with a little extra thought, your purchases can turn into a collection, and perhaps an investment. Here are some tips for new collectors, including upcoming sales and art fairs to stop by.

Check Out The Fall Pre-Season Auctions

The lure of buying at auction is that you can get an interesting piece for what it would sell for below retail, but the danger is that depending on who else is bidding, it could spike and go for a higher price. With original fine art, you’ll probably want to see the piece in person, so start with a local auction house in your region like Doyle New York that handles mostly “fresh-to-market” estate property or Wright in Chicago that specializes in contemporary art and design. You can buy long-distance by getting condition reports and then bidding online or by phone. Keep in mind added shipping and insurance charges.

New collectors might look for lesser works by major names, works by once-forgotten artists that are part of a revival, or artists who were hot in the 1980s but whose works are now selling for less than they left the gallery for, says Harold Porcher, director, Modern & Contemporary Art for Doyle New York. “It doesn’t make sense to buy decoration when you can buy fine art,” he says.

Even if you’re on a low budget, try to buy the best you can afford. “The bargain mentality can be a mistake,” says Elaine Banks Stainton, executive director at Doyle. One client who owned an insurance company insisted on buying the cheapest thing he could find and after 20 years of bottom feeding has a collection of odds and ends. Instead, find a period that speaks to you and try to buy a collection that has some continuity. Don’t just focus on one artist; rather, sprinkle money into various artists and that way, potentially one or two of them might take off. Porcher had a client who only bought American abstract works on paper from 1927 to 1945, and now at the end of his life, has exhibited his collection at a museum.

Don’t be afraid to go to the top art venues. “There’s an issue with art being perceived as very exclusive,” admits Jonathan Laib, head of sales for postwar and contemporary art at Christie’s in New York City. But he insists that even Christie’s, which sold a 1964 Lichtenstein for $42.6 million for casino developer Steve Wynn last year, is accommodating to folks with lesser art budgets. Christie’s “off-season” sales include the Sept. 21st First Open sale of contemporary and post-war art with star lots in the six figures but a good number of works where bidding will start below $20,000.

Christie’s Interiors sales, which include fine arts as well as decorative arts and furniture, are haunted by decorators but individual buyers can find hidden gems at these too. In the August Interiors sale, an impressionist cypress tree in a landscape by a Russian-American painter, Mischa Askenazy, estimated to bring $1,000 to $1,500, fetched $4,375, while a still life of a colorful bouquet of flowers by a French painter, Pierre Lemarchand, estimated to sell for $800 to $1,200 went for just $675. (It was without reserve, meaning the highest bidder gets it no matter how low the bid).

Art fairs can be the best place to go for collectors looking for something new and intriguing at lower price points. There are typically dozens of galleries, a few hundred artists, all under one roof. You can get a wealth of information by talking to the gallery owners and sometimes the artists themselves. In New York, there’s the Affordable Art Fair, being held Sept. 21 to 25, and billing itself as “shaking up the dusty model of art as an elite pastime.” All artworks at the fair are in the $100 to $10,000 range, with three-quarters of the works selling for under $5,000 (the old top limit). For a look at exhibitors, with links to art for sale, click here. There will be an L.A. edition of the fair Jan. 18 to 22 next year.

If you’re a little more adventurous and live in, or plan to visit, the New York area, there’s an art fair held every weekend in September on Governors Island. There are more than 100 invited artists, most not yet represented by a gallery. Each gets a room or attic space in the old officer’s housing buildings to exhibit his or her work. Warning: this isn’t a bunch of still lifes. Sculptures of bats by Deborah Simon hang in one attic room and swoop through a stairwell; there are Juliette Conroy’s eerie photographs of dust, and Elisa Arroyo’s meticulous folded etchings grouped into 3-D boxes. Artists pay no fee to participate, opening the door to undiscovered talent.

(As an added bonus, on your way to the fair you can meander through an outdoor exhibit of Mark di Suvero’s abstract sculptures on the island in a show put on by Storm King Art Center).

Almost every major city has its own art fair. The Houston Fine Art Fair runs Sept. 16 to 18; Art San Diego just wrapped up; Art Chicago on the pier is in March 2012. For ogling the crème de la crème, there’s Art Basel Miami Beach (December 1-4), the sister event of Switzerland’s Art Basel, held in June. Or head back to New York to the Art Dealers Association of America’s long-running fair, The Art Show (March 7-11, 2012 at the Park Avenue Armory in New York City).

The reality is that the vast majority of art depreciates when you bring it home, so you should buy works that you love and want to see every day. If you buy work from emerging or even established living artists, there may or may not be a secondary market, warns Julie Mussafer, founder of Jules Place, a Boston gallery that deals in contemporary artists. “You need to think what appeals to you from an aesthetic standpoint not an investment standpoint,” she says. Some galleries have a quiet policy for reselling work, but you should buy works you’re pretty sure you’ll want to hang on to.

If you have a particular spot to fill and find an artist you like but the painting doesn’t fit, consider commissioning a piece. Mussafar says a lot of her artists work in series and will paint something similar in a different size for a 10% to 20% surcharge. She’s brokering a piece by St. Louis minimalist painter Michael Hoffman whose works sell in the $3,000 to $5,000 range for an investment banker client who is looking for something dramatic to place on a 10-foot wide space above a front entry door. While Jules Place is in the South End, that same client also shops at the tonier Newberry Street galleries. Most galleries have monthly openings, just ask to be added to their mailing lists. They’ll also alert you to special neighborhood gallery happenings.

Don’t be put off if you go to a gallery and the prices of the works on exhibit seem out of your league. Besides the show on the walls, there are lesser-priced works kept in the back by the artist on view as well as by a whole stable of artists the gallery represents. For example, Dorsey Waxter, executive director of the Greenberg Van Doren Gallery, showed Sung’s large-scale paintings in the 2009 show when the Westport, Conn. collector Tony Greenberg bought his painting; now she has a series of Sung’s smaller paintings that sell for $18,000 and watercolors that sell for $6,000.

Joining your local museum gets you free entry into exhibits and a host of other perks that can help you grow as a collector. For example, a patron of the Aldrich Museum of Contemporary Art in Ridgefield, Conn. can tour top private collections, brown bag it with emerging artists, and visit New York galleries with the museum’s executive director (disclosure: I’m a member). There’s often also the opportunity to buy art. Greenberg, a patron of the Aldrich, picked up a few pieces at the last bi-annual Aldrich Undercover event, where 200 artists (past artists include Sol Le Witt, Roz Chast, KAWS) who have shown at the museum create original art for $300 a piece sold to benefit the museum. Kirsten Pitts, an Aldrich member who lives in Greenwich, Conn. bought a piece by street artist Michael De Feo at the event last year. She’s also bought at an annual benefit for the Neuberger Museum of Art in Purchase, N.Y., which has silent and live auction items. Her pick: a naturalistic painting by Julie Langsam of Le Corbusier’s Villa Savoie set in an empty landscape.

Art schools are another place to look for art by current students, and sometimes by graduates. In Los Angeles, Ryman Arts will host An Affair of the Art on Sept. 24 (Herbert Ryman, the school’s founder, did the initial sketch for Disneyland). For a preview of works for sale, click here.

No matter where you buy or what you end up buying, Greenberg has these trite but so true words: “It’s about trusting your gut and finding something that speaks to you.”