Art Fairs Spring Up All Over This Month 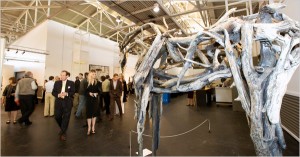 The Bay Area has long been knocked for its lack of commercial prospects for artists of all stripes, including visual ones.

San Francisco may be teeming with young creative types, but most who want to make a living from art depart for New York or Los Angeles, where strong gallery scenes are complemented by scads of art fairs, a staple of the contemporary art market.

Last year, for the first time in the better part of a decade, the city hosted the San Francisco Fine Art Fair at Fort Mason. By most accounts it was a success: organizers say that more than 15,000 people attended and $5 million in work was sold.

This year, the city is poised to get not one but three art fairs — ArtMRKT, ArtPadSF and the San Francisco Fine Art Fair — all taking place between May 19 and 22.

Although the local art scene is abuzz with anticipation, the success of three simultaneous art fairs is far from assured. Skeptics say that the new fairs did not screen galleries carefully enough, leading to sketchy quality. And while last year’s fair filled Fort Mason, the surge in fair locations means that the art audience will be pulled in different directions.

The trio of fairs is “a kind of risky endeavor,” said Glen Helfand, an instructor at California College of the Arts and an art critic.

“They show that a lot is going on here,” he said, but “there are a lot of galleries that I’ve never heard of.”

The fairs take pains to distinguish themselves from one another: The San Francisco Fine Art Fair and ArtMRKT are the most conventional, both run by professional art-fair producers based on the East Coast. ArtPad, founded by Chip Conley, executive director of Joie de Vivre Hotels, and Maria Jenson, an art consultant, has the most alternative feel. It will take place in the Phoenix Hotel and features more experimental programming than the other two. (Burning Man’s Black Rock Arts Foundation, for instance, is curating its opening night celebration.)

San Francisco has had fairs before, but nothing on this scale. In 1995, to coincide with the opening of the San Francisco Museum of Modern Art’s new building, Jack Hanley, who owned a gallery in the Mission District until last year, did an alternative art event at the Phoenix Hotel. There was an occasional art fair at Fort Mason, but that dried up over the last decade.

But last year brought a new start, with the reintroduced Fine Art Fair. Put on by the Hampton Expo Group, a company based in Southampton, N.Y., that also hosts art fairs in Aspen and Houston, the event attracted a mix of 80 or so local and out-of-state galleries.

This year, it’s slightly smaller — 70 exhibitors — with about half the exhibitors coming from outside the Bay Area. Of the three, it has the widest mix of exhibitors, featuring photo galleries alongside street-art-focused spots like Fifty 24 SF.

One of the people behind that effort, Max Fishko, split from the Hampton Expo Group in 2010 to start his own art-fair business, ArtMRKT Productions, this year.

ArtMRKT “leans toward the contemporary,” Mr. Fishko said. With some 65 exhibitors, about 30 of whom are based in the Bay Area, ArtMRKT tried for an international presence: dealers from London, São Paulo and Gibraltar will show alongside locals like Baer Ridgeway Exhibitions, Electric Works and the Frey Norris gallery.

By contrast, Mr. Conley’s vision for ArtPad is as much about good times as sales opportunity. The presence of small, hip galleries like Ever Gold Gallery in the Tenderloin, and a return visit from Mr. Hanley, an influential gallerist who represents Mission School artists like Chris Johanson, helped persuade others, like Steven Wolf, of Steven Wolf Fine Arts, to sign on.

“I like the idea of an art fair, especially in a hotel or motel,” Mr. Conley said, “We will have a nonstop party.”

The list of galleries participating in one or more of the fairs is impressive — blue-chip dealers like Rena Bransten, and art-fair newcomers like Kala Art Institute — but a number of locals chose not to participate.

“I couldn’t quite grasp why there were three fairs, how they were differentiated from each other,” said Jessica Silverman, of the Silverman Gallery in San Francisco, who opted out of the action.

And even some who got booths are dubious. Mr. Wolf, who described himself as a generally negative person, said that the San Francisco fair organizers were “art world interlopers” who had attracted mostly “nobodies” to their events.

Others feel differently. Marianna Stark, who publishes an art guide, said the city had “hit the lottery,” and Catharine Clark, owner of the Catharine Clark Gallery, who helped Fine Art Fair last year with gallery selection and has been advising ArtMRKT, said that the local art community had a responsibility to nurture the nascent fair scene.

“The success of the fair isn’t completely out of people’s control,” she said, “To view it as negative competition is shortsighted.”

-Re-posted from the New York Times