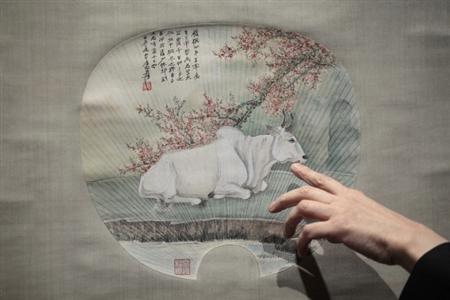 In a spacious, luxury apartment perched on the leafy hills of Hong Kong, Kai-Yin Lo browses through a trove of Chinese art acquired over several decades, reflecting how her niche, scholarly pursuit has now hit the mainstream.

Despite giddy Chinese art prices showing some strain from global economic uncertainty, collectors like to think values will continue to rise due to limited supply and continued strong demand as Asian collectors become more affluent.

“As East and West get into more of a confluence in taste and in the market place, it will still go up,” said Lo, a Cambridge-educated writer and jewelry designer, a slim, elegant woman famously known for wearing mis-matched designer shoes.

She is one of Hong Kong’s leading art collectors — her home is stacked with rare Chinese furniture, stone carvings and paintings, including an inkbrush panorama of the Grand Canyon by Chinese 20th century master Wu Guanzhong.

“These days art investment has entered into the mainstream of investment, especially for younger people. You cannot divorce love of the piece from what lies behind, the value of it.”

Hong Kong has played a key role in Asia’s art market boom. Its auction market turnover — anchored by Sotheby’s and Christie’s — skyrocketed 300 percent from 2009 to 2010, powered by a wave of Chinese millionaires buying art with avid fervour.

“Hong Kong has became the sales centre of the world,” said Patti Wong, chairman of Sotheby’s Asia, with revenue in the former British colony on par with New York and London.

Despite the art market’s vulnerability to shocks, including the 2008 Lehman Brothers collapse, when unrealistic estimates left scores of unsold lots amid tepid bidding even in the red-hot Chinese ceramics market, Asia’s rapid wealth accumulation will likely see more and more money flow into art and alternative investments such as wine.

Asia’s wealth management and private banking industry remains a sparkling growth area for many struggling banks, with an estimated 3.3 million high net worth individuals worth more than $1 million, according to Capgemini and Merrill Lynch’s latest annual World Wealth report.

With a combined wealth of $10.7 trillion, Asia’s wealthy have even eclipsed the $10.2 trillion held by Europe’s generational millionaires.

“The exponential growth in the number of emerging market (millionaires) … is expanding the global market for investments of passion,” the report said.

While art often comes straddled with hefty commission, storage and insurance costs, it can serve as a fun portfolio diversifier, mixing decent returns with aesthetic pleasure.

“It may not be a good time for sellers but it’s an excellent time for buyers. During late 2008 and 2009, I highly advised clients to buy,” said Bobby Mohseni, director of MFA Asia, an art consultancy. “With Chinese contemporary art, some prices have gone exceptionally high and that’s just over a decade … so it’s best to look at upcoming or mid-tier artists.”

While stocks on the S&P 500 have outperformed Western art over the past 25 years, according to Mei Moses data, top Chinese and Asian art is still comparatively cheap compared with Western impressionists or American contemporary art. A Mei Moses index for traditional Chinese art showed a 24 percent jump in the first three quarters this year.

Even for those with less purchasing muscle, experts say bargains can still be had in less spotlighted categories, including modern Filipino and Indonesian painters, as well as photography, and Chinese snuff bottles, to name a few.

Qi is one of the masters of inkbrush paintings and his pieces sell for millions of dollars.

Owners of Hong Kong’s art galleries, many of them crammed along the winding Hollywood Road in the Central district, say timing is the key.

“If you get good works of art, then without any question it is (a safe haven) but it doesn’t have the liquidity. That’s the difficulty,” said Sundaram Tagore, whose galleries in Hong Kong and the United States feature a stable of culture-bridging artists.

“If you’re trying to sell at the wrong time it becomes part of the distressed market but if you’re selling at the right time then you could make 100 times more, maybe more than property or any bonds can provide you.”

The search by Asian investors for alternative assets has extended beyond art into wine, gems, watches, postage stamps and other memorabilia — the rarer and more exclusive, the better.

With about two-thirds of the world’s stamp collectors in Asia, the stamps and collectibles market has surged, says Geoff Anandappa of stamp and memorabilia retailer Stanley Gibbons.

Hong Kong-based InterAsia Auctions — which specializes in Asian stamps — broke world records for Chinese stamps in September, raking in $12.6 million over four days. A 1941 Dr Sun Yat-Sen inverted centre stamp fetched $221,000, up 66 percent from a similar sale a year ago.

Chinese and Asian buyers have cornered the fine wine market, with a Hong Kong Acker Merrall & Condit wine auction in December bringing in $9 million, including a single superlot of 55 Romanee Conti vintages that fetched a record-breaking $813,000.

Similarly, Asian buying is behind the boom for diamonds and gems. China is on course to become the world’s top diamond buyer and retailers in Hong Kong report a rise in the number of men coming to buy loose diamonds for investments.

A Hong Kong jewelry retailer recently raised $2 billion in one of the city’s biggest initial public offerings this year to fund expansion in the region.

“It’s not the old days of ‘safe as houses’, put your money in the bank and that will sort you out,” said Jon Reade of the Art Futures Group, a Hong Kong-based art investment firm.

“Those are the days probably of my parents’ generation … people are getting more creative with their money.”