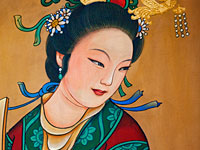 When Chicago-based Leslie Hindman Auctioneers held its Asian arts sale in May of this year, they expected sales of somewhere around a million dollars.

The sale ended up racking up $4.2 million—with 80% of the buyers coming from China.

2010 was Hindman’s most profitable year in three-decade career in the industry, and 2011 is looking even better. Following difficult results in 2008 and 2009, the art and antiques market appears to be positively booming.

“The degree to which the art market lost value during the recent economic downturn was a fraction of the downturn in the securities markets,” says Jim Hedges, President of Montage Finance, an investment advisory firm specializing in fine art. “The recovery in the art market was quite quick because there are a large number of global investors who are putting more to work in art as an investment class.”

Don Thompson, author of The $12 Million Stuffed Shark: The Curious Economics of Contemporary Art, says that art market has been buoyed by the developing world.

“There are five contemporary museums being built and stocked, two in Abu Dhabi, one in Quatar, two in China,” he said in an email. “Just the five are buying 450-550 museum-quality works a year, for probably a billion dollars. That is the market.”

Political changes have also driven the rise of the developing world into art market savior.

“Forty years ago, it was illegal to own a piece of art in China. These days, it’s the second-largest art market in the world,”

MarketWatch reported last month. “A new wealthy class, along with a lack of investment options, has propelled China’s ascendancy in the global art trade, which last year was worth around $63 billion.”

In the developed world too, according to Hedges, art is being taken seriously as an investment class in a way that perhaps it wasn’t in the past.

“There are an increasing number of people recognizing that art is an investment class and part of wealth management,” he says. “Given inflationary fears, people view art as a diversification away from securities.”

“I believe that you’re going to see more people utilizing art as an investment tool for diversification and superior, equity-like returns,“ Hedges added. “It is a global currency and people will use it as a substitute for liquidity in their own currency.”

Hindman echoes that assessment. “Rich Americans are investing in tangible. They’re calling and saying ‘We’ve got a lot of cash, we don’t want to put it in the market. We’re thinking of buying some contemporary art.’ People who aren’t even serious collectors are looking to buy tangible assets.”

But just as the doom and gloom of three years ago marked an inflection point, with rising prices comes rising risk. Sotheby‘s results have leveled off a bit in recent months, reports Art Market Monitor, noting that “[auction price] estimates have caught up with the market”, and strong sales results are no longer a surprise, with perennially high expectations now raising the risk that anything less than near-record prices could spook the market.

In the long run though, the financial benefits of fine art, however substantial they may be, don’t even represent the greatest part of the return. As Goethe wrote, “Collectors are happy people.”

This is a guest post from Zac Bissonnette, a contributing editor with Antique Trader, where he recently covered trends in the antiques market on display at Brimfield. He recently spoke with Marketplace about the financial benefits of furnishing your home with antiques and vintage finds.