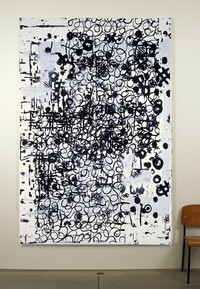 The Miro had been put on reserve at the booth of the Montreal-based gallery Landau Fine Art Inc. during yesterday’s VIP preview of Tefaf, the European Fine Art Fair, in Maastricht, the Netherlands.

The galleries were among 260 offering artworks with a total value of more than 1 billion euros ($1.4 billion) at the fair.

Collectors were holding back from buying at the preview because of concern that political unrest and natural disasters would affect investments, dealers said.

“What’s happening in the Middle East and Japan has affected confidence,” Steven Kettle, executive director at London-based Stonehage Investment Partners LLP, a multifamily office of wealth managers, said in an interview. “The clever big money is very cautious at the moment.”

Preview Sales
Two abstracts by the New York painter Christopher Wool, priced at a combined $2.35 million, were among the few big- ticket sales at the start last night.

Wool’s 1999 enamel-on-linen “Night of the Cookers I” was priced at $1.5 million on the booth of the New York-based dealer Van de Weghe Fine Art. The artist’s 2004 “Untitled (P447)” was valued at $850,000 by the Brussels- and Paris- based dealers Odermatt-Vedovi. Both were bought by different Northern European collectors.

A total of 10,080 visitors attended yesterday’s preview, a 3.4 percent decline from last year, said Tefaf. Chicago- based contemporary-art collector Stefan Edlis, browsing the fair for the first time, was among a dwindled contingent of Americans, and Sheikh Saud al Thani of Qatar was one of the few Middle Eastern visitors spotted.

The modern-art section of Tefaf had been depleted by the absence of dealers such as Hauser & Wirth, L & M Arts and Luxembourg & Dayan, who had exhibited last year.

Bottle Tops
Some exhibitors were eager to counter perceptions that visitors had been distracted by events in the Middle East and Japan. “It was our best-ever opening night,” said Tefaf stalwart Axel Vervoordt, a Belgian dealer who creates room settings with an eclectic mix of art and objects. “It often happens that when there’s a commotion in the world, people want to find joy in something.”

A colorful metal bottle-top hanging by the Ghanaian contemporary artist El Anatsui priced at 600,000 euros — and bought by a Russian collector — was among over 20 pieces sold at the VIP preview, Vervoordt said today.

The Amsterdam-based dealer Noortman Master Paintings sold three paintings and a drawing for a total of $15 million at the preview. These included a 1671 oil-on-panel view of Haarlem by Gerrit Berckheyde priced at 4.5 million euros and a 1937 Picasso drawing of Dora Maar marked at $2.5 million.

“Whatever might be happening in the world, the art market is in a better place than it was two years ago,” gallery director, William Noortman, said in an interview. “There are some confident sellers and some confident buyers out there.”

Freud’s Mother
A 1972 Lucian Freud portrait, “The Painter’s Mother,” acquired from the artist himself, was the stand-out lot on the booth of the Munich contemporary-art dealer Galerie Daniel Blau, priced at 2.8 million pounds ($4.5 million). “It feels no different from last year,” Blau said in an interview. The Freud had attracted interest, though no reserve, by 2 p.m. today, the official opening day of the fair, said Blau. He will be holding an exhibition of Freud works sourced directly from the artist at his Munich gallery in May.

Rembrandt’s 1658 “Portrait of a Man With Arms Akimbo,” shown by the New York-based dealer Otto Naumann Ltd., with a price tag of $47 million, and Frans Francken’s 1635 figure- packed allegory, “Mankind’s Eternal Dilemma — The Choice between Vice and Virtue,” priced at $14 million by London- based Johnny van Haeften Ltd., were the star works of the Old Master paintings section, the traditional backbone of the fair. Neither had attracted early formal reserves.

Picasso Minotaur
The Francken had been bought by Van Haeften for a record 7 million euros at an auction in Vienna in April last year. “Maastricht is much slower than other fairs,” said the London-based exhibitor, Ben Brown, who is offering the 1958 Picasso painting, “Minotaur,” for $5 million. “The type of person who comes here tends to be European and a bit older. They have a look, go home and do their research.”

A Chinese late Qianlong-dynasty rock-crystal sculpture of a “Qilin” mythical beast was among the few confirmed early sales to Asian visitors. Priced at $65,000, it was bought by a Hong Kong collector on the booth of London- and New York-based dealers Littleton & Hennessy.

Re-posted from Bloomberg. (Scott Reyburn writes about the art market for Muse, the arts and culture section of Bloomberg News. Opinions expressed are his own.)