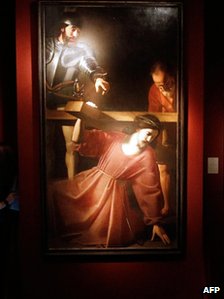 France has laid claim to a 17th Century painting currently being displayed by a London gallery at an art fair in Paris.

The Carrying of the Cross by the French master Nicolas Tournier was bought last year for 400,000 euros ($550,000) by the Weiss Gallery of London.

But the French government says it is stolen property and that its whereabouts had been a mystery for nearly 200 years.

France has put an export ban on the work to prevent it leaving the country.

Tournier’s life-sized study of Christ carrying the cross once hung in the chapel of the Company of the Black Penitents in the southern French city of Toulouse.

During the French Revolution, the painting was confiscated by the state and put on display in a museum, but in 1818 it disappeared.

Nothing was heard of the work for nearly 200 years, but two years ago in resurfaced in Italy during the sale of an estate of a wealthy Florence art collector.

Today the picture belongs to the Weiss Gallery of London which bought it at the 2010 Maastricht art fair.

The Weiss Gallery had brought the painting to the French capital for Paris Tableau, a small art fair devoted to Old Masters.

But the French Culture Ministry is demanding the return of this long-lost work of art and has slapped an export ban on it to give it time to press its claim.

“This was the property of the French state that was deposited at the Augustins Museum in Toulouse and was stolen in 1818. It is a non-transferable work,” the ministry said in a statement.

“We are claiming this painting as the property of the state and it will not leave the country,” the ministry said.

A Weiss company representative declined to comment on the culture ministry’s statement.