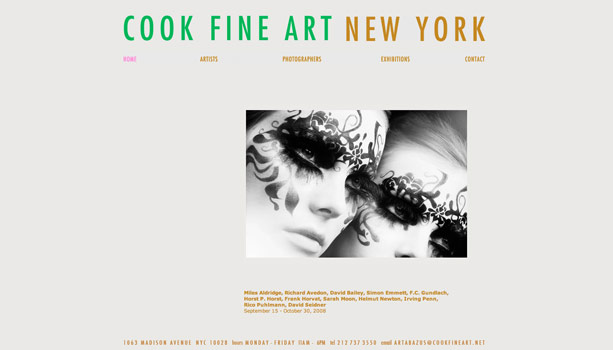 It’s like a story out of a mystery novel.

R. Scott Cook, the owner of the now-defunct Cook Fine Art gallery, is being sued by one of his clients, George Ball, according to the Courthouse News Service. Ball filed the lawsuit against Cook for allegedly stealing the proceeds of nine works of art that Cook said were sold at a June 2011 Christie’s auction in London.

Cook and his wife, Soussan A.E. Cook, are partners and owned a gallery at 1063 Madison Avenue until it closed two years ago (the last exhibition listed on the gallery’s Web site closed in October 2008). Both Cook and his wife, Cook Fine Art LLC, and New Yorker Storage Co. dba New Yorker Arts, are named in the lawsuit as defendants.

According to the Courthouse News Service, Ball notes in court documents that in 2010 he asked Cook to sell nine of his paintings at a major auction house. Cook then told Ball he would sell them at Christie’s June 2011 auction in London. However, Ball says that he has yet to see the money from the proceeds of the sale.

Ball claims to have reviewed Christie’s online catalogue for the sale, and reports in his complaint that his paintings never appeared at the auction. The Courthouse News story goes on to say that Cook got in touch with Ball in late June and informed him that his artworks — two works by Picasso, three by Matisse, a Klee, a Kandinsky, a Schiele, and one work by Paul Delvaux — went for €3.4 million ($5.3 million). According to the suit, on August 9, Cook sent Ball an email stating that his money was coming but that it had not “cleared” yet.

The Courthouse News Service further reported that a Philadelphia-based lawyer, James Eisenhower of Schnader Harrison Segal & Lewis (who was a White House Fellow during the Clinton administration and the 2004 Democratic candidate for Attorney General of Pennsylvania) contacted Ball, claiming that the proceeds of the Christie’s sale had already been spent. Incredibly, the complaint filed by Ball (as quoted by Courthouse News) claims that after stating that the Cooks were no longer in the country, “Mr. Eisenhower said that Cook hoped to work something out with plaintiff, that Cook might be able to raise $1 million if he could sell some artwork, and that Cook hoped to avoid being prosecuted.”

After the email, Ball, through his lawyer, demanded payment or return of his art from the Cooks. Neither the art-dealing couple nor their lawyer have responded. Ball’s court statement, quoted by the Courthouse News, states that before this incident, “Cook has had an excellent reputation for honesty, trustworthiness and ability as an art dealer.”