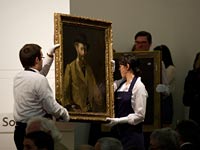 After the earthquakes, floods and tornadoes of the past year, a tsunami of panic has swept through the ranks of general insurers. Disasters such as the earthquakes in Japan and New Zealand, coupled with the political turmoil in the Middle East, made 2011 the most expensive year ever for the industry – inflicting losses of more than £30 billion ($47 billion).

The art insurance world has suddenly realized the scale of unforeseen risk in its market. Collectors are buying art on an unprecedented scale at astronomical prices and putting many of these works into storage in just a few tax-free port warehouses.

It has dawned on specialist art insurers that they face an unsuspected and unsustainable risk that could run to many tens of billions of pounds.

The problem lies in the fact that many collectors mainly purchase art for investment purposes, using free ports in order not to declare where works are kept, as well as a way of avoiding taxes and duties.

The majority of the world’s art that is not on display, either in museums or private residences, is stored in a small number of tax-free ports across the globe, mainly in Switzerland.

Until recently, this was a world shrouded in secrecy, and insurers had no idea of the true value of the art treasures they were insuring, according to Adam Prideaux, a leading broker with Blackwall Green, a specialist art insurer.

Clients used to receive worldwide cover that allowed them to keep works in their house or in storage without the need to specify details.

Recent changes to Swiss customs laws mean that art stored at the country’s free ports must now be declared and descriptions, values and country of origin provided. Specific declarations are also now required by insurers. It is these changes that made insurers pay attention: in trying to collate all this information, they started to realize the level of risk involved, and have been prompted to scrutinize cover more closely.

Each of the main ports is thought to house an average of $10 billion of art, a staggering figure. “It’s a huge value of art; it goes into hundreds of billions of dollars [worldwide],” Prideaux says. “But they really don’t know. The pressure they’re under – they’ve got to find out what’s there.”

Despite high-security warehousing, there is just too much value and too few insurers. They simply would not have enough funds to pay out in the event of a catastrophe. This has led insurers to think the unthinkable – and to start preparing to protect themselves against the worst possible scenario. What if an aircraft crashed into one of the free port warehouses adjacent to an airport?

Insurers could not cover the loss if a single warehouse containing, say, a Rembrandt, a Titian and a couple of Picassos were destroyed. Picasso’s “Child with a Dove”, for example, is on the market and it is thought it will fetch about £50 million ($79 million).

Prideaux says the scenario of a plane falling on one of the free ports has put the risk into perspective: “Insurers went, ‘Yikes, we’ve got to go out and buy insurance to protect ourselves.’ So they started passing these extra costs on to clients. Everybody thought putting art into storage [offered] great security, [but] in fact, it was the exact opposite. There’s not one insurer that will take on new business in a free port now. They’ve got too much art there and they don’t have enough reserves. As the art market drives up and up… the way the insurers look at it is: what is the maximum possible loss at any one time? [That’s] their buzz word.”

He adds: “You can’t underestimate the significance of speculation and investment in the market at the moment. People buy works and put them out of sight. They don’t want them talked about [or] documented.”

Terrorists could target a free port warehouse. Concentration of priceless artworks also increases the risk of specialist thieves seeing such storage as a juicy target, and even an accidental fire becomes an unthinkable risk. The 2004 blaze at a London facility of Momart, a specialist storage and transportation company, remains fresh in memories. The value of artworks lost was estimated at up to £50 million.

The problem has been exacerbated by a huge rise in art prices. Data from Art Market Research, the art prices indices provider, records remarkable growth since its first figures in 1985. Median prices for sales of the top 25 per cent of Old Master and Impressionist paintings have risen since that date more than six-fold and five-fold respectively.

But even they are outshone by modern artworks, whose prices have increased nearly 12-fold, and contemporary works, which have increased an astounding 30-fold. This is due to the commercialization of galleries, which trade in works by the likes of Tracey Emin, the high-profile British artist, and because of dealers, notably Charles Saatchi, who thrive on publicity.
In the five years to February 2012, Old Master and Impressionist median prices rose about 50 per cent – an even more dramatic increase than over the previous 20 years, although there was a reversal in 2010 due to the financial crisis. Even more dramatic have been the rises in the last five years in the prices of modern paintings, which have more than doubled, and contemporary works, which have grown three-fold.

As a result, median prices in February 2012 for the most valuable 25 per cent of paintings were, for Impressionists, just short of $1 million each; for modern art and contemporary works around $600,000; and for Old Masters $300,000.

With median prices at these levels, it does not take much imagination to see the scale of the risk relating to high-priced works in storage.

Robert Read, head of art and private clients at Hiscox, the UK-listed insurer, says: “We are concerned about the accumulation of risk in storage and free port locations, and we try and keep a close tally of them.”

Insurance premiums depend on location and storage security. Obviously those in a potential catastrophe area such as California or Florida would attract a higher rate, he observes. “It would also depend on whether [an artwork] was on its own or part of a larger collection, where there would be an economy of scale factored into the rating.”

“If it was in the free ports, the majority of insurers wouldn’t be able to do it. They would decline it because they haven’t got any [financial] capacity.”

He believes that because they would aggregate the risks all round, if they did insure it, the premium would be much higher, perhaps £30,000 ($47,400) more. “This highlights the whole problem of storage in the free ports. The main insurers such as Hiscox and Axa wouldn’t do it… You would have to go to some other not-so-good insurers and they would charge more because they would have to buy extra reinsurance.”

There are free ports in the UK, but they are generally not considered to be specialist art warehouses and do not have as many tax benefits or the sophisticated security of those in Switzerland, primarily Geneva, Zurich, Basel and Chiasso. The Geneva facility alone spans an area equivalent to 22 football pitches. Another large one is planned in Luxembourg.

The effect of all this is that insurers are putting up premiums hugely – up to double the original rate – and also turning to reinsurance. On the other hand, some collectors are seeking new pastures – free ports in places such as in Singapore and the US – to spread the risk.

Singapore, however, is reportedly almost full, both physically and to a point where insurers have little capacity to take on more value. Demand for storage space here is huge because, crucially, there is still no obligation to reveal details. Artworks – and their owners’ identities – can be stored “free of tax in total confidentiality”, the Singapore port says. It calls itself an “art fortress”, but its literature is understandably silent on the risk of a site next to Changi international airport.

Pierre Valentin, a specialist art lawyer based in London, recommends that clients who want to store expensive art verify that the facilities they select are suitable and secure. Art in storage should be insured by specialist fine art insurers on the basis of its current market value.

Valentin warns collectors against assuming that storage companies will insure automatically. In England, the obligation to insure rests with the collector. The storage company may agree to arrange insurance for the collector, but this should be agreed at the outset and in writing. If the art is not insured, and it is damaged or lost, the storage company’s liability will be contractually limited to a derisory sum.

Valentin confirms that changes to Swiss customs laws have led to fears that confidentiality in the country’s free ports “is not what it used to be”. This has given the Singapore free port a competitive advantage.

He understands that certain insurers will no longer insure artworks in specific free ports where they have too much risk concentrated. One of the advantages of free ports is that art transactions can occur there tax-free, he says. “When expensive art is being bought and sold, it is not unusual to move it to a free port for, say, a week. The art is sold there free of tax, and the art then moves on.”

Insurers will not reveal the limit to which they can insure because it gives away too much to competitors about the strength of their business. But no one insurer can ever take more than about £100 million of art at any one time, Prideaux believes. “Instead, the insurers group together when, for example, they are asked to do a big exhibition such as a Van Gogh or a Monet show, where the values are astronomical with total values into the billions of pounds. The only way you can do that is to group together every art insurer in the market.”

There could be an unintended consequence of this problem, though – museums might benefit. Collectors might find it cheaper and more secure to loan works to them, rather than paying for storage.