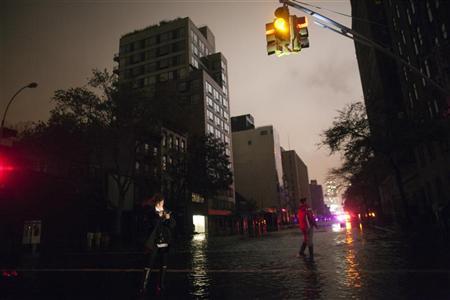 Receding water after Hurricane Sandy left its ugly mark on the walls of New York’s art district, rising up to five feet on some buildings, and gallery owners sifted through the debris on Friday and assessed damage to valuable works of art.

Streets in the Chelsea district on the West Side of Manhattan bordering the Hudson River were strewn with discarded frames and building material from damaged galleries, remnants of the ravages of Sandy, which flooded some spaces with several feet of water.

Helen Im, a co-owner of the Fine Art Conservation Group with Suyeon Kim, which restores art, said most of the damage was to ground-floor galleries.

“We’ve never seen an event like this in the neighborhood. It is surreal, honestly, to see this much damage all at the same time and so widespread,” she said in an interview.

Chelsea is home to a hundred or more art galleries clustered from West 14th to West 26th streets with total inventories in the tens of millions of dollars. Galleries range from big names like Gagosian and Pace Gallery to startups and smaller dealers.

Although the area is in an evacuation zone and owners took precautions to safeguard the works of art by protecting them with plastic and packaging them or moving them to higher levels if possible, many were left stunned by the impact of the storm.

“It was devastating,” said Rachel Churner, the owner of the Churner and Churner Gallery, which opened less than two years ago just two blocks from the river.

“Everyone prepared the best they could, but the damage was much worse than anticipated.”

Although her ground floor was fine, the basement of the gallery was completely ruined.

“I don’t have a dollar amount of damage,” she explained. “We are still hoping that a lot of things can be restored and are shifting through debris, trying to figure out what can and cannot be salvaged.”

David Platzker, the owner of Specific Object, a bookstore specializing in rare books on post-1969 art, was one of the lucky ones. His gallery is housed in a high building across from the Hudson River.

“Theoretically, we suffered no damage at all, although we are prevented from accessing our building until power is restored, which hopefully will be no later than Monday,” he said.

But he is troubled by what he has seen in the area.

“There are scum lines that are four feet off the ground,” he said. “One can only imagine what that means to the damage to the physical space and the art content.”

In her 20 years as a painting conservator, Im said she has never dealt with anything like this. Her studio is already full of art work from clients in the area.

“Some of them are a total loss and will have to (be) dealt with through the insurance company, but many can be recovered,” she said, adding that some galleries will have to be gutted.

“There is a wide range of damage. I’ve seen some ground-floor galleries that have no damage to art work at all and others that have been completely devastated. It just comes down to how much they have stored at a lower level.”

Although Im could not estimate her losses, she said the works range from a few thousand dollars to hundreds of thousands of dollars each.

“For those that did suffer a lot of damage, it is shocking. This is going to be going on for weeks or months, sorting out the damage and what can be treated,” she said.

“It is going to be a long-term effort for the area to recover what they have lost or what can be restored.”