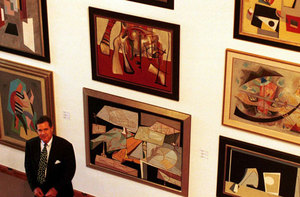 Trafficking in fine art and other antiquities has emerged as the third most lucrative criminal activity in the world behind only drugs and guns.

“It’s a $6 billion industry,” according to former FBI agent Robert Wittman, who spent years chasing thieves, going underground to track down famous works of art. Wittman is thrilled to learned the piece by Flemish master Pieter Paul Rubens, circa 1618, has surfaced in Athens.

“When these pieces are stolen, there’s always the danger that they would be destroyed or damaged irrevocably so when one of these pieces is recovered, no matter how long it takes, it’s a wonderful gift to humanity,” he said.

So, where has the Rubens masterpiece been for the last ten years? “I would surmise that what happened was there was an offer to buy [it] by the Greek police in an undercover fashion, and these guys, they bit on the fish bait and went in there and tried to sell it,” said Wittman.

The problem for thieves, explained Wittman, is that many high profile pieces of art simply can’t be resold like a fancy watch or a diamond ring.

“What happens with these things is that criminals steal them, they hold on to them and then the first thing that they find out is that they can’t do anything with them, they can’t be ransomed back, they can’t be sold because they’re so well known, collectors don’t want them so the criminals are good at stealing but they’re not good at selling.”

Wittman says thieves just can’t resist the lure of pricey fine art. “They’re thinking, ‘If I steal a Picasso, I can get a million dollars for it.’” But they can’t. “They don’t realize that what they have is a white elephant that can’t be sold.”

Art is usually recovered years after it’s stolen when it’s put up for auction by an unsuspecting seller or when police get a tip. “[Thieves] keep putting feelers out within criminal groups, trying to find somebody who’d be interested in buying it and sooner or later it hits the wrong person, a police informant and pretty soon you’ve got a sting operation going on.”

Wittman is now a private security consultant and author of a book: “Priceless: How I went undercover to rescue the World’s Stolen Treasures.” He recalls a big art theft case he cracked while working undercover for the FBI in Europe. “We were able to conduct an undercover operation where I was [posing] as an authenticator for the Russian mob and finally convinced them to bring us the painting.” The thieves were asking just $250,000 for a painting valued at $36 million.

So, why do thieves continue to go after high priced art when they can rarely move it?

“They always think they can do better,” said Wittman. “They figure that if they can take it, they can find a buyer down the road somewhere and that’s what they’re hoping, they’re hoping for a payday.”